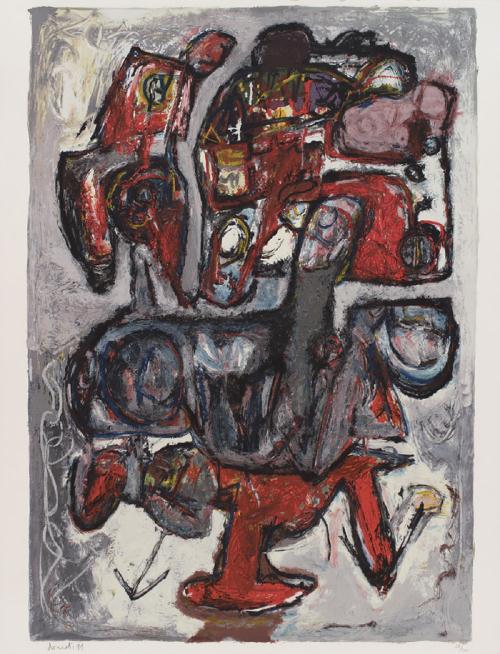 Jacques Doucet was among the few French members of CoBrA, the Northern European group of figurative-expressionist painters who established a painting style related to what Abstract Expressionists in the late 1940s and 1950s were doing in the United States. Doucet briefly had been a member of the Paris-based Revolutionary Surrealist movement, but the former World-War II political prisoner thought of the group as too political. As a member of CoBrA he never involved himself much with the theoretical side of the movement, instead feeling more at home in its general free artistic, expressionist climate and the intense manner in which CoBrA artists involved themselves with their art. After an initial fascination with Paul Klee and Joan Miro, Doucet turned to total non-representation, creating mixed media works of paint and collage and using a rather individual warm, poetic, abstract language. The graffiti on the walls of World War II prisons influenced his work. Doucet’s art is in museums throughout Europe, including Amsterdam’s Stedelijk Museum and CoBrA Museum, Denmark’s Louisiana Museum for Modern Art, the Centre Pompidou in Paris and the Musee d’Art Moderne de la Ville de Paris.